Introducing Liiikes: A web app that uses statistics to find the best content on Dribbble

Today, along with Jeffrey Chupp (my developer half on this project), I’m happy to announce the launch of Liiikes, a web app built using the Dribbble API. 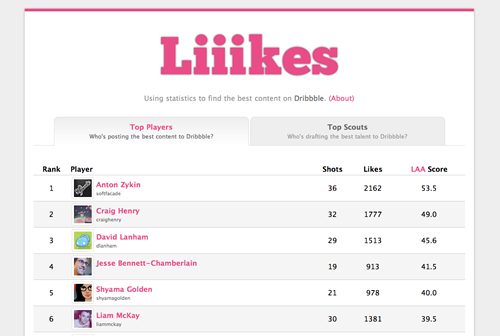 Dribbble is a site where designers can share small screenshots of what they’re working on. “Shots” (or, individual screenshots) are limited to 400×300 pixels (it’s like 140 characters, but for images). Dribbble also happens to be run by two of the nicest guys I’ve ever met, Rich Thornett and Dan Cederholm. One of Rich’s first tasks when moving to Dribbble full time was to create an awesome API. He certainly succeeded, and Liiikes is just one of many apps to take advantage of the API already. (You can see more examples at Rebbbounds.)

I’m a baseball stat geek. Dribbble is full of basketball metaphors, but it’s also full of numbers—shots, followers, likes, pixels, etc. I wanted to see how we could use these numbers to see who was posting the highest quality content to Dribbble.

Also, Dribbble is not a completely open community—you need to be invited, or “drafted”. So, there’s this interesting dynamic that everyone on Dribbble is there because someone else brought them in. I wanted to see who was responsible for bringing in the best talent, so I’m calling those folks Dribbble scouts.

I’ll admit, the scouts idea was inspired by Craig Henry. I drafted Craig into Dribbble (we have some mutual friends and I saw he was seeking an invite). Turns out, he’s a mega-superstar on Dribbble and I was proud that I drafted him.

Both the top players and top scouts are rated by “Likes Above Average”.

Likes Above Average (LAA) is the metric used to build the Liiikes leaderboards. Inspired by the Wins Above Replacement model that’s all the rage in the baseball sabermetrics community, LAA calculates how many more likes a Dribbble player receives than the average player.

Craig Henry happened to rate as the #2 player on all of Dribbble, with 49.0 LAA (I’m writing this with pre-launch numbers… LAA totals can and do change daily). This puts the MVP of Dribbble as Anton Zykin (with an LAA of 53.5). Anton has posted 36 shots and received 2,162 likes. That’s a lot of likes.

It should come as no surprise that the #1 scout is Mr. Dan Cederholm.

I also wanted to thank my good friend Jeffrey Chupp, my developer partner on Liiikes and the guy who sits to my left at PatientsLikeMe, for helping me take this rather arcane idea and turn it into what I think is a pretty sweet app. I already knew from my day-to-day work that Jeffrey was an awesome developer to work with, and that certainly was true during the development of Liiikes.

So, please enjoy Liiikes! I’d love to know what you think.