I love music and I love statistics. Therefore, Last.fm is perfect for me. Last.fm tracks the music that you listen to in iTunes (or through the Last.fm desktop app, the Last.fm iPhone app, and some other services) and gives you charts showing your listening habits. Of course, you can see what everyone else is listening to, discuss certain artists, albums, or tracks, view recommendations based on your library, or see what users have similar taste to you.

Another great feature of Last.fm is the charts over a certain time period. Of course, the “Last 12 months” comes in handy on days like today. So, without further rambling:

Rogue Wave had a new album in March and Arcade Fire had one in August. Both were incredible. I’m not surprised to see them in the top two spots. Teenage Fanclub and Mogwai are old standbys. The top five is rounded out by Gustafer Yellowgold, who I happen to be building a site for.

I’m a full album listener. So, this list isn’t really representative of my favorite tracks of the year. It’s just the ones I listened to the most. 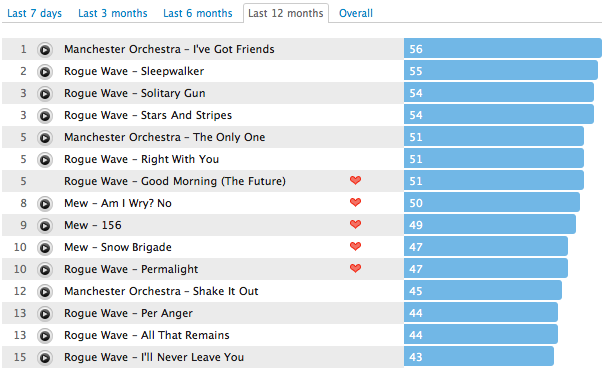 The Top 19 tracks are all Rogue Wave (the entire new album!), Mew, and Manchester Orchestra. #20 is Gustafer Yellowgold’s incredible “Getting in a Tree Top”.

Okay, enough of the charts. Here’s the good stuff!

10. Spoon — Transferece: I’ve been into Spoon for a very long time. While I like their entire discography, my favorite album of theirs is still their first (Telephono, on Matador). But they still put out solid material worthy of a Top 10 appearance.

9. The National — High Violet: This is a couple solid albums by them I’ve found myself listening to a lot. “Blood Buzz Ohio” is just such a ridiculously good track, as are many others.

8. The Album Leaf — A Chorus of Storytellers: I picked up a couple Album Leaf albums this year and they’re the closest I’ve come to something similar to the fantastic Low Level Owl albums from The Appleseed Cast.

7. Teenage Fanclub — Shadows: Teenage Fanclub is my most listened-to band of all time. They came back strong with this solid offering. “Baby Lee” and “When I Still Have Thee” are two of their best tracks in a long time.

6. The Wandas — New Wave Blues: This band won the local radio station’s Rock Hunt. I only started listening to them after the competition, but damn they’re good. “Bending Over Backwards” is definitely one of the best tracks of the year.

5. Band of Horses — Infinite Arms: This may not have been their best album, but it’s still plenty good. It was a lot more mellow than their past work (which did also have some mellow stuff), but they pulled it off.

4. Palmdale — Get Wasted (EP)
3. Palmdale — How To Be Mean (EP)
One of the best things to happen in music this year was the return of Kay Hanley (formerly of Letters To Cleo). Her new band is simply incredible. Palmdale is everything that is wonderful about pop music and nothing that isn’t.

2. Rogue Wave — Permalight: When this album came out in March, I thought for sure it was going to be the album of the year. This was the year that Rogue Wave jumped to a new echelon in my music library. Permalight was a bit of a departure from their previous work. It had a bit more pep to it. It was livelier. But, personally, I had a shitty 2009. Rogue Wave’s 2009 was probably even shittier. They needed this. And so did I. Remarkable album at the right time.

This album also contains the best track of the year—Sprawl II (Mountains Beyond Mountains).

Late to the Party

Every year, I also pick the best album that wasn’t released in the past year, but I recently discovered it in the past year. In this category, there were four standouts. My first purchase by The Album Leaf was Into the Blue Again and it’s excellent. Manchester Orchestra’s Mean Everything to Nothing got a ton of airplay, too.

This is another case where I thought for sure the top album would be an easy choice. Then I stumbled upon the eponymous album by Edward Sharpe and the Magnetic Zeros. That album was simply incredible. Yet, it couldn’t knock Mew from the top spot. So, the Late to the Party Award goes to Frengers by Mew.

Hope you have a great one!